It is school vacation week here in Massachusetts.  We have nearly 5 feet of snow with even bigger snow drifts and frigid arctic air so we are mostly inside.  It can be difficult to find things to keep the kids busy all day.Are your children like mine in that they are whining that they are bored and school vacation has just begun?

Are they tormenting the pets or each other in your home?
Constantly nagging you that they have nothing to do despite the roomful of toys upstairs?
Do you wish for JUST-FIVE-MINUTES of quiet without having to keep resorting to electronics to keep them occupied? Me too!
Here are some activities we’ve done in the past that I thought I would re-share as some of them we did them with my older son and now we can do them again but now with two boys!  These fun indoor ideas will help your child get some needed creativity expression out and your the few minutes of quiet calm time.
Be Prepared!
Before we get started, I would like to recommend to put down a disposable plastic table cloth.   These are big and help keep the mess contained as well as easy clean up!  I usually purchase these from the dollar store.
And second, I would recommend to  purchase a Creativitray by Romanoff Products.  This tray holds 16×11” finger paint paper but we also use them for clay, crayons, watercolores, sand – if it’s messy – these trays are great to have around.   I’ve purchased them at Michael’s with my 40% off coupon they usually have or you can also find them at Amazon.  If you don’t have one on hand, a cookie sheet with a piece of foil on it is a good compromise.
Once you have your tablecloth and trays on the table – you are ready to conquer snow cabin fever!
Liquid Mess  – Molten Lava

Most of us have done or heard of this experiment of mixing baking soda and white vinegar together.   Well, my boys love doing this activity as they request it often!I gave each child a small bowl of baking soda, a spoon, a cup of vinegar and food coloring (which I held on to and assisted when requested).  My older son got a thrill watching the “explosion” when the two ingredients were mixed together.  My younger son enjoyed using fine motor skills of scooping up the baking soda with his spoon and pouring it into the vinegar.  The trays were covered with a liquid mess but who cares – it was fun for them and as messy as it looks, easy clean up on the trays. Volcano with Lava (aka Liquid Mess)

A variation on this activity is to make a volcano out of clay or play-doh first for the Molten Lava to “explode” out of.   I took a 16oz plastic water bottle and cut it in half and used just the bottom half to mold the play-doh around it in the shape of a volcano.  We may not win any science fairs with it but it worked and the kids enjoyed creating it.  The anticipation of the volcano exploding is really what brought a lot of excitement for my kids.  My older son, Dylan also thought it would be fun to add a dinosaur and a guy as they lava came foaming out! We have done the tub paints so many times!  My 8 year old son has been playing with shaving cream paints since he was 2 and still absolutely loves painting the tub walls.   My original post can be found here.    Two pictures of what my bathtub looked like after the boys were done painting.  Showers are great for washing it all away when done. These two ingredients can be mixed together to make either a fabulous sensory activity as we did previously shown here or your child can make a snow scene or snowman such as we did together recently.  We mixed the two together just mixing at a ratio of 1:1 as well as some glitter to make our pictures sparkle.  While the boys created their snowmen, I got out some construction paper and scissors so they could cut out some simple shapes to decorate their snowmen.   The pictures take a while to dry but once they do, perfect to hang up and look fantastic! Whether you are stuck inside due to all this snow and cold or just need an easy activity to do together, I hope these help create some inspiration!

Hi I’m Christine! You are in the right place if you are parent in Massachusetts or surrounding area and you’re looking for fun things to do with your kids! I’m a mom of two boys and I love to share travel tips, parenting hacks, road trip & staycation ideas! Read More Here! 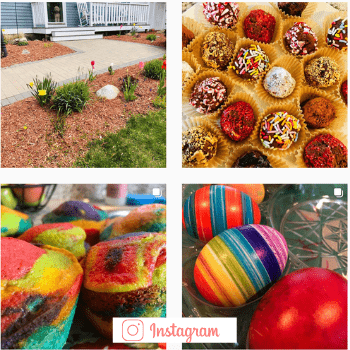