Whether camping or at home, kids and adult love card games.  When you're camping, packing light is ideal. Yet, you need to be able to still play games with your kids. Here are 6 games you can play with a deck of cards. Go Fish is a great game for kids of all ages. Classic Go Fish is collecting 4 cards with the same number or suit.  But, when I play with my preschooler, we like to make books of two.  This also makes it easier to hold the cards in his little hand.

Crazy Eights is similar to the card game Uno, deal out 7 cards to each player and put the discard pile in the middle. Flip over the top card.  The first person puts down either a card of the same number or same suit. Put down an 8 which is a 'Wild' card and now they get to choose which suit they would like to change it too.  Keep going until you have one card left. Did another player catch you not knocking on the table when you have one card left? Oh my, pick up a card!  This game is great for younger kids as it helps matching suits as well as learning their numbers. Also, my kids use to love catching mom when I forgot to knock on the table signifying I have one card left. Concentration is also known as Match or Memory game. For this game, I like to make the deck smaller by taking out 10 pairs of cards. Shuffle the cards and lay them all out in rows. Take turns flipping over two cards. Did you get a match? It's yours to keep and you get another turn! Play until all matches are complete.

Old Maid is a fun game if you have three or more people. Scan the deck for the 4 queens. Pick one to be the old maid and put it back into the deck. The other three ladies get to sit out this game.  Shuffle the cards and deal out all the cards. It doesn't matter if one person has more than someone else.  Look through your cards to find pairs of two.  Put those cards in your own discard pile. Holding up your cards fanned out in your hands, each player takes turns picking one card.  Did you get a match? Place it in the your discard pile.  Keep going until there is only one card left in one players hand which will be the 'Old Maid'.  My kids love mixing their cards up before we draw a card and try hard not to make giggling faces when I start to pick the old maid. Deal all 52 of the cards to all those playing. Keep them in a pile, faced-down in front of you.  Now take turns flipping over one card at a time on the same discard pile. When a Jack is flipped over, everyone slaps their hand down on the card calling out "Slap Jack!" Who's ever hand hit the card first, gets the Jack and all the cards under it.

War is my least favorite game besides SlapJack. I mean who wants their hand slapped?  Regardless, my kids love it, but before they learned the card game "War",  we played "More".  'More' is 'War' but a much quicker version that I created to play with my kids.

Deal out 10 cards each.  Keep them in a pile, faced-down in front of you.  At the same time, all players flip over a card.  I would then say to my little guy "Which one is more?" and he would pick the number that is higher.  My kids loved this game and the best part is once you are through all the cards in your pile, the game is over! Count up your cards and see who got the most.

Card games are fun. They teach children how to take turns and counting as well as playing fair and being a good sport.  They will be developing their fine motor skills by shuffling, dealing and handling the cards.   You can play cards nearly anywhere.  On a blanket, at a picnic table, in your tent, at a restaurant.  So pick up a deck of cards and play a game today!

What is your favorite card game to play with your kids? 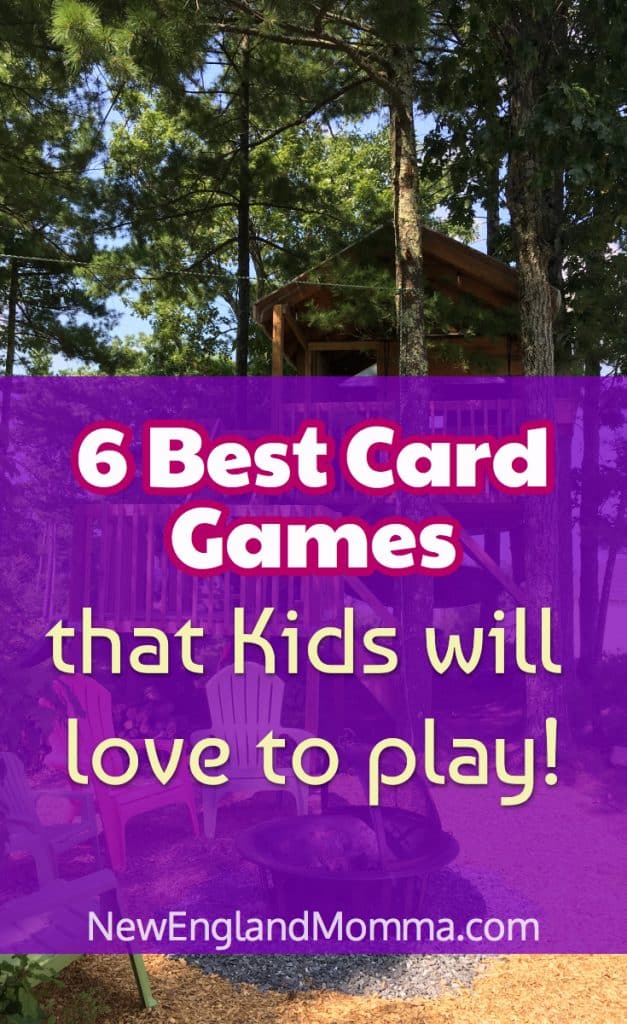